Westports Holdings Berhad (“Westports” or the “Company”) conducted its 28th Annual General Meeting (“AGM”) via remote participation and electronic voting. This is the Company’s third fully virtual or electronic meetings, where the entire proceedings were broadcasted to shareholders that have registered and login into a designated online meeting application.

The AGM was chaired by Tan Sri Datuk Gnanalingam A/L Gunanath Lingam, the Company’s Executive Chairman. Datuk Ruben Emir Gnanalingam bin Abdullah, the Group Managing Director of Westports, also presented during the AGM. Westports responded to queries received from shareholders and the Minority Shareholder Watchdog Group (“MSWG”) during the virtual AGM. The Company added that queries received during the online AGM and the answers provided would be uploaded and posted on its corporate website.

The audited financial statements for the financial year ended 31 December 2020 (“FY2020”), together with the reports of the directors and auditors, were duly received by the Company’s shareholders. The shareholders of Westports duly passed all resolutions for the AGM by way of poll via remote participation and electronic voting. The results of the poll were validated by an Independent Scrutineer appointed by the Company. Selected key highlights during FY2020 are as follows:

Despite the worst pandemic in a century and its pervasive subsequent global adverse effects, Westports still handled a container throughput of 10.5 million TEUs, the second-highest ever in its history and was only 3% lesser than the previous year’s record volume. Westports was the first and still is the only port in Malaysia that handles more than 10 million TEUs of container throughput in a year.

During FY2020, Westports achieved a new container volume record by handling 23,183 TEUs in a single vessel. The Company deployed 9 Ship-To-Shore Cranes to perform the feat on a 400-meter long vessel. Westports’ team worked around the clock and achieved extremely high overall vessel productivity levels by attaining 286 Vessel Gross Moves Per Hour (VGMPH) in the 46-hours of operations.

Westports accommodated the world’s largest LNG-powered containership that commands a length overall (LOA) of 400 meters with a carrying capacity of 23,000 TEUs in December 2020. That vessel coincidentally is also the highest nominal capacity container ship that has called at Westports.

The ASEAN Capital Markets Forum (ACMF), a high-level grouping of capital market regulators from all of the ten ASEAN jurisdictions of which Malaysia is represented by the MSWG, awarded the ‘ASEAN Asset Class Publicly Listed Companies’ Award’ in November 2020 to Westports in recognition of its good corporate governance practices.

The Company has adopted a prudent approach of temporarily trimming the payout ratio to 60% to conserve cash in FY2020. Westports distributed a total dividend amounting to RM393 million or 11.52 cents per share. The Company will revert to a payout ratio of 75% in the coming financial year. Since Westports initial public offering in 2013, the Company has distributed a total dividend of RM3.14 billion to shareholders.

Datuk Ruben Emir Gnanalingam bin Abdullah, the Group Managing Director of Westports, envisaged that “economic growth should recover in 2021 after a pandemic ravaged year. We expect a single-digit container throughput growth level. The vaccination programme roll-out worldwide should pave the way for a gradual recovery in economic activities while the fiscal stimulus is bolstering economic activities in many countries. Peering into the longer term, the slight congestion experienced by Westports at the end of 2020 and constraints experienced by many ports abroad reaffirmed our vision of the need to undertake the proposed mega container terminal expansion that we have been planning for in recent years. Westports’ new expanded facility would double the total container terminal handling capacity and enhance total yard space significantly. The eventual expansion to CT17 will anchor Westports and Port Klang as one of the preeminent transhipment hubs in South East Asia”. 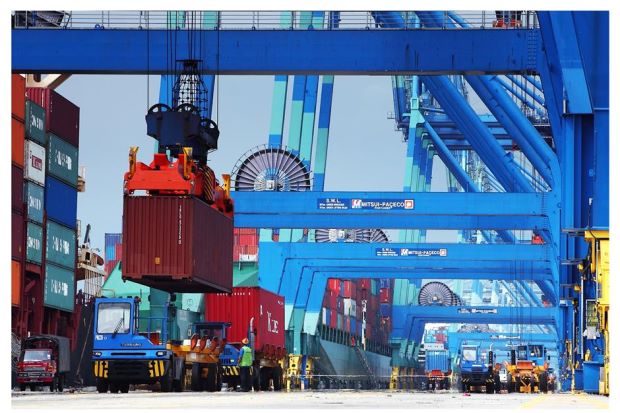